BY Frederic Dubois
The adoption of photovoltaic (PV) solar and electric vehicle (EV) charging stations at residential and commercial locations is a trend that has come to be broadly called electrification. This ongoing trend presents significant opportunities and threats to power utilities as PV and EV adoption increases. Conventional and next-generation solutions will need to be leveraged in order to manage the electrification impact.

An average conventional household electric load typically ranges from 1 to 5 kilowatts (kW) at any given moment. The variation in usage is mainly caused by whether heating, ventilation and air conditioning (HVAC) systems are operating along with water heaters and other large appliances, and how coincident all these loads are.

This demand scales up exponentially when an EV owner installs a Level 2 charger. This load block adds between 5 kW and 20 kW for three to eight hours to the daily usage profile at a residence (see Figure 1).

Vehicles charging at a public station on a Level 3 direct current (DC) fast-charging unit can cause even more aggressive spiking, ranging from 50 kW to 350 kW per vehicle in a timespan that usually lasts less than an hour.

An average conventional household electric load typically ranges from 1 to 5 kilowatts (kW) at any given moment. The variation in usage is mainly caused by whether heating, ventilation and air conditioning (HVAC) systems are operating along with water heaters and other large appliances, and how coincident all these loads are.

This demand scales up exponentially when an EV owner installs a Level 2 charger. This load block adds between 5 kW and 20 kW for three to eight hours to the daily usage profile at a residence (see Figure 1).

Vehicles charging at a public station on a Level 3 direct current (DC) fast-charging unit can cause even more aggressive spiking, ranging from 50 kW to 350 kW per vehicle in a timespan that usually lasts less than an hour.

[Figure 1] Level 2 EV charging can cause a significant spike in residential load.

When connecting an EV to a Level 2 charger, the additional load can be one to four times the maximum instantaneous demand of an average household.

Multiply this impact by the number of EVs plugging in simultaneously at various points across the grid, and the challenge faced by electric utilities becomes clear.

Utilities today face the reality of coping with a much more dynamic power distribution grid than when the power distribution grid was originally designed and built. This load volatility is a phenomenon that is becoming increasingly commonplace as the electricity demand equivalent to entire neighborhoods may pop up and then disappear at various nodes throughout the day.

Solar PV deployments in distributed locations across the distribution grid introduce a set of challenges different from the risks of overloading and load volatility caused by EV charging.

Power quality issues are among the most common challenges, often stemming from cloud coverage that obscures panels from solar irradiance. During these periods, rated production may drop to less than 10% of capacity. Moreover, this rapid swing can then be reversed within a second when the cloud cover disappears.

Power quality issues also can be caused by the harmonics introduced by inverters that are needed to convert the DC power produced by solar panels into the alternating current (AC) power required by distribution grids. These harmonics are distortions in the shape of the AC voltage sine wave and can result in anything from annoying light flickers to more serious problems such as tripping sensitive power electronics, or even disrupting commercial and industrial processes.

Most PV deployments follow the proper interconnection process, allowing the power utility to inspect and confirm they will disconnect if the grid should lose power and not back feed. Though undisclosed PV systems are rare, they can present a significant risk to field personnel if they handle what are presumed to be deenergized lines during outage events only to find that a PV system actually is making a hot circuit.

Another safety concern may be introduced when the power generated is higher than the load in the electric vicinity, causing the power to flow upstream back toward the substation. If the backflow is contained within a lateral, it may keep a fuse from tripping. Alternatively, if it should spill onto the main trunk, then recloser settings may have to be recalibrated to be more sensitive. Likewise, if the backflow should reach the head of the circuit, breaker trip settings would need to be corrected.

EV and PV impacts compound when both technologies are present on a circuit. For example, the customary “duck curve” gets accentuated by EV adoption due to natural patterns of life. The concave chunk that PV systems take out of a typical load profile ends when the sun comes down. Coincidently, that is often around the time that EV owners get home from work and plug in. The net impact is a duck with a long neck (see Figure 2).

[FIGURE 2] The duck curve caused by solar production is exacerbated by EV charging in the evening.

Visibility and Flexibility are Key

Considering safety first, unregistered solar PV sites can be detected by analyzing energy consumption, voltage and events reported by advanced metering infrastructure (AMI) meters. The accuracy of this monitoring approach depends on how granular the measurement profiles are. For an extra dose of precision, analysts can also correlate the weather or solar irradiance to these profiles. Similarly, EV chargers can be detected via analyzing premise consumption patterns so utilities can maintain awareness of what power distribution assets outside the fence are at risk of becoming capacity bottlenecks.

Grid operators are essentially dealing with the aggregated impact of individuals plugging in their cars, generating their power or a combination of the two. Conventional demand response solutions could be sufficient for relatively limited electrification scenarios, provided that the utility offers enough incentives to entice a significant number of customers to join direct load control programs or adopt time-of-use (TOU) rates. In addition, the utility may institute requirements for PV sites rated above a certain output threshold to include a local battery energy system to smooth out the peaks and valleys of solar production during partially cloudy days.

Community energy storage (CES) systems are another option to address distribution grid challenges. Though CES can be expensive, these battery-based systems are versatile with capacity typically ranging between 250 kW and 1 MW for typical durations ranging from 30 minutes to four hours, depending on the pain points the system is designed to alleviate. These systems can be strategically deployed to address either load density and peak load reduction, or to mitigate PV penetration density that creates intermittency and backflow issues. These systems have the versatility to also address some combination of these two factors.

Integrated volt/VAR optimization (IVVO) is another advanced solution designed to enhance grid flexibility. Simply put, this is an orchestrated array of switched capacitor banks, inline voltage regulators and load tap changers operating based on feedback from distributed sensors, such as bellwether meters or primary line sensors. All these solutions can be integrated under a platform referred to as a distributed energy resource management system (DERMS), where circuit or system-level context is leveraged to make centralized decisions for distributed assets to work together (see Figure 3). 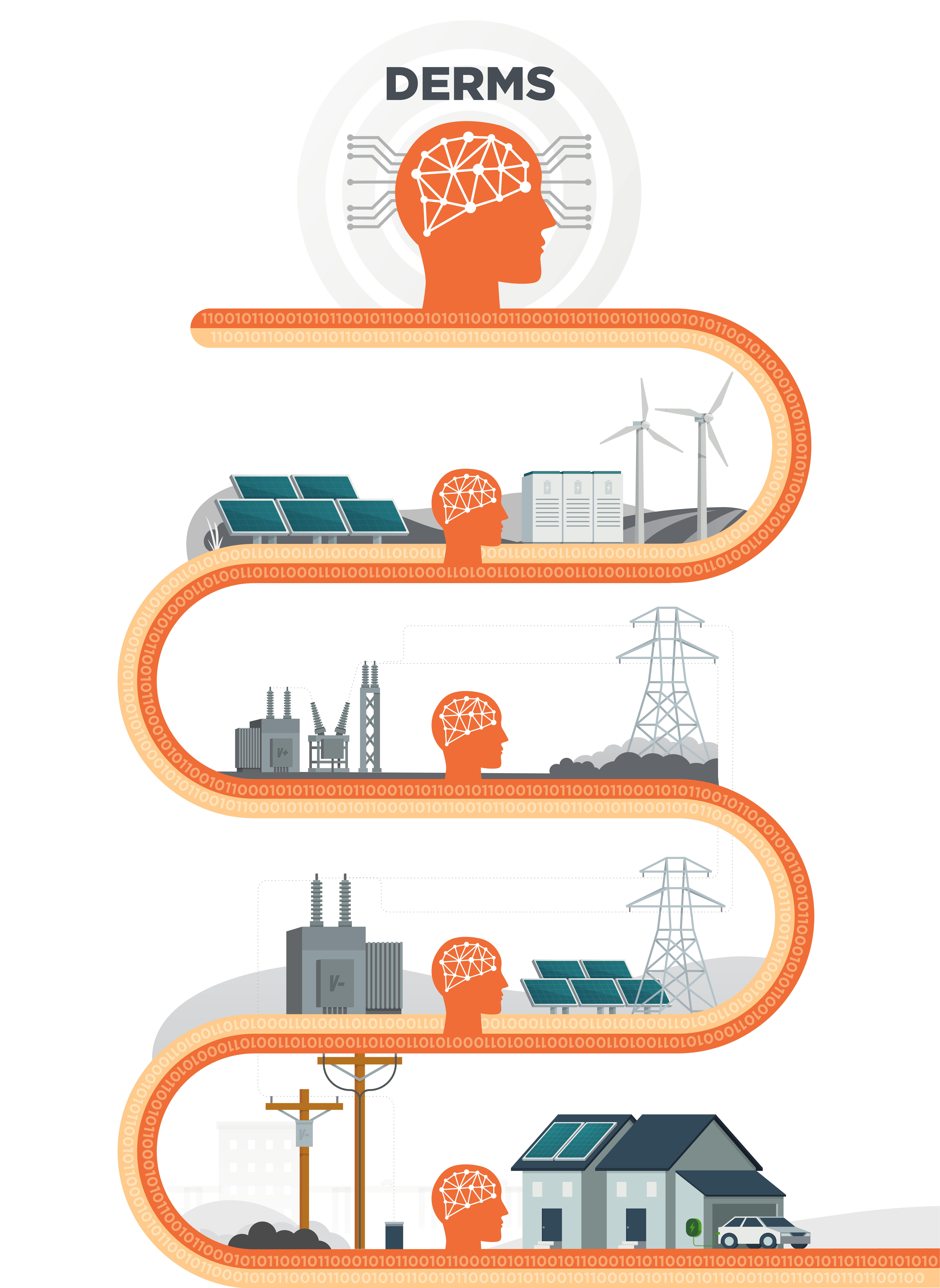 Looking ahead to the near future, advancements in edge intelligence — such as next-generation AMI meters, smart PV inverters, and EV chargers — will enable devices to socialize and react quickly to local conditions. Additionally, FERC 2222 opened the market for load aggregators to bid and participate in the power market, which ultimately provides an incentive for end users to lend their EVs or PVs to demand response programs. These upcoming technologies and context changes have the potential to expand the flexibility of the distribution grid by allowing for quick local control from edge computing and influence system loading via market signals.